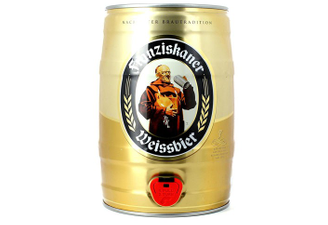 Discover one of the most popular beers in Germany in its 5L Keg!

Franziskaner Weissbier belongs to the category of « Weissbier » beers, i.e a beer brewed with malt made from 50% of wheat. This is the case of the Franziskaner which is brewed with 75% of soft wheat and 25% of malted barley. It is therefore a wheat blond beer, one of the best examples of the kind, which enjoys an established reputation that extends far beyond the borders of its place of birth: Germany.

This Franziskaner Weissbier displays an amazing golden colour with pink gleams. Its generous head is long-lasting and you can’t miss its abundant effervescence. In the nose, you will experiment the typicalWiessbier aromas with fruity scents with visible signs of citrus fruits and ester of banana along with spicy aromas of pepper and yeast.

In the mouth, the gustative taste pattern shares similarities with the olfactory structure, displaying sharp flavours of fruits and overcoming banana dominance over the whole. The spicy note then clearly reveals itself with pepper hints followed by the taste of clove and vanilla touches.

To conclude, Franziskaner is an exceptional beer, it is extremely refreshing and appears as a reference in the category of wheat beers. It is worth to note that wheat beers can have several names that are very similar such as Weisen, Hefeweisen, Weissbier and Kristalweiss…