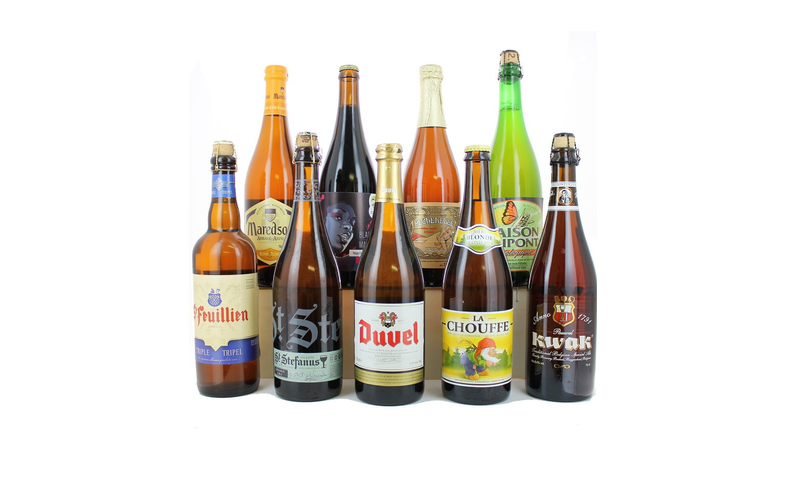 Find in this exceptional gift pack 9 Large Great Beers from Belgium, to be offered as a present of shared during a friendly meal.

You’ll find in this gift pack:

The Kwak: Featuring sweet flavours with fruity notes of plum and nuts along with hints of caramel. This beer is particularly sweet and soft, but does not contain too much sugar.

The Gouden Carolus Triple: It just needs to be aged for some time in your cellar. The second fermentation it undergoes in bottle allows it to improve its taste up to two years after bottling. The Golden Carolus Triple won the “Gold Award” in the 2002 World Beer Cup in its category.

Karmeliet: This Belgian beer pours a nice golden colour topped by a creamy white head. It challenges the nose with subtle and complex aromas: notes of vanilla and banana along with citrus fruit hints coming from Styrian, a specific type of hop.

Kriek Lindemans: Fruit are added during the production of this beer before it is aged in oak casks. It allows the fruit to brew in the beverage and causes a second fermentation of the beer while ageing in casks.

St Feuillin Triple: It displays a white, thin and very compact froth and challenges the nose with rich scents of aromatic hops, spices and aromas specific to the fermentation process, that is to say very fruity. The second fermentation in bottle provides the beer with a unique scent due to the yeast.

Maredsous Brune: The Dark beer from Maredsous is an Abbey beer originally brewed for Christmas. It has progressively become an undisputable great beer brewed throughout the year. It pours a dark burgundy colour topped by an impressive head releasing distinctive aromas of caramel and fruity notes.

The Chouffe: The Chouffe is a non filtrated lager which has been fermented three times in bottle. It is pleasantly fruity, spicy with coriander and lightly hoppy. Many times winner of medals in contests all around the world, the Chouffe is one of the most popular beers from Belgium.

The Saison Dupont: Brewed from 1844 in the Ferme-Brasserie Dupont (Farm-Brewery), the Saison Dupont is a Belgian beer which has established itself as a reference in “Belgian Season”. Brewed with freshly harvested hops from late summer, this beer has aged during winter and is ready to be consumed just when warm days come closer. It pours a golden coulour that turns slightly cloudy in the glass, the Saison Dupont features also a long-lasting head that dances all round the glass rim.

The Brudse Zot: This Brugse Zot is a craft top-fermented lager produced in the historical center of Bruges, it is the last one to be produced there. The inhabitants of Bruges are locally named the “Brugze Zotten” (The crazy people of Bruges), they decide to name the beer after this peculiar nickname.