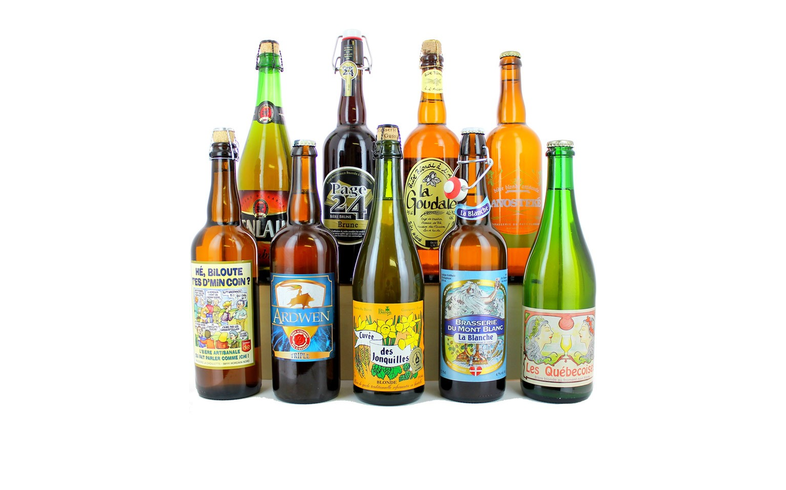 Discover a great Gift Pack made up of 9 Large 75cl Bottles of French Beers.

Find in this gift pack 9 exceptional large French Beers, the perfect present for Christmas or to be enjoyed with friends and family.

In this gift pack you’ll find:

The D’artagnan: The D’artagnan pours a clear golden colour topped by an impressive and short-lasting head. It challenges the nose with very light aromas of barley and grains. As a true beer of character, it features distinctive and tasty flavours of cereals, while hoppy bitterness strikes in the end.

The Triple Secret des Moines: L’abbaye de Crespin. It is a 100% natural lager with fruity aromas. Fresh hopping used during the second fermentation provides the beer with delicate scents. It contains barley and wheat and is fermented a second time in bottle. The recipe of this beer is secretly preserved for centuries and is composed of, among many other ingredients, of a secret spice.

Page 24 Blanche, Gold Medal in the 2009 and 2011 General Agricultural Contest and Silver Medal in 2008 and 2010, the Page 24 Blanche (Wit) is made of cereal wheat added at the beginning of the brewing process and is flavoured with hops and spices. It pours a typical slightly cloudy colour due to the wheat, in keeping with every Witbier production tradition.

Mont Des Cats: 163 years after it was first brewed, the Abbey of Mont des Cats renewed its brewing tradition in 2011. The ninthTrappist in the world features very fruity aromas; hops are noticeable in the end of the tasting along with floral and citrus fruit notes.

Bracine Brune: The Bracine Brune is a craft beer from Pays Flamand produced since 2008. This small craft brewery from Northern France has quickly managed to establish itself as a reference in the region and beyond, since it was rewarded with several medals for its beers. The Bracine Brune pours an unexpected dark amber to brown colour and releases aromas of roasted malts, wood and dry fruit.

Anostéké: Launched in 2010, this craft beer has rapidly conquered the heart of many beer amateurs in the region of Lille, in Northern France, because of its taste and aromas. Brewed in accordance with the brewing trends of the moment, this beer belongs to the IPAs’ family, a type of beers where hops play a predominant role since it is used in a greater quantity than for other beers.

Cuvée des Jonquilles: The Cuvée des Jonquilles is a non filtrated beer that has been fermented a second in bottle. It pours a pale golden and slightly cloudy colour. The bitterness and flavours it features make it a perfect beer for a friendly moment or as a drink during meals. Serve it chilled (6°C) and store it cap up. Yeast in the bottom of the bottle comes from fermentation and provides the beer with its impressive effervescence.

St Glinglin Ambrée: The beer was made with carefully chosen aromatic malts that provide the beer with a nice taste of hops. It pours a golden colour with copper glints and topped by a rich ivory head. This beer releases impressive aromas in notes of hazelnuts. It features flavours of coffee and light caramel. Poured in a silky texture, its warm bitterness has a good length on the palate.